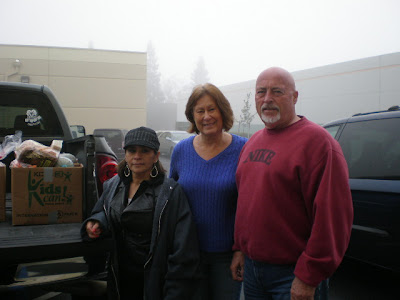 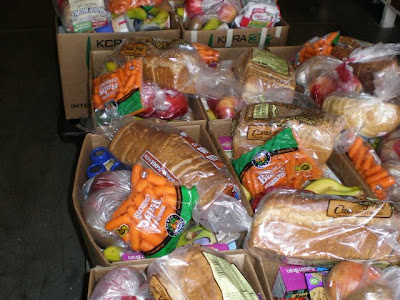 Angie and I quickly totaled up the numbers while the food and supplements were being loaded into volunteers' vehicles. Forty-five clients received Wellness Bags today; 36 were delivered by volunteers to home-bound clients.

The Wellness Bag is a supplemental food program designed to provide vital nourishment to individuals living with specific chronic illness or those with disabling HIV/AIDS. Our services are confidential and provided at no cost.

Clients receive non-perishable food bags along with fresh produce. Frequently, additional food items are available along with nutritional supplements and vitamins upon request. We also provide delivery to the home bound; and frozen meals for those who have been hospitalized.

The Wellness Bag program is available to clients in the Elk Grove, Laguna, and Wilton communities. However, clients residing outside this immediate area may be served only through referral by human service organizations, case managers, and medical professionals.

Applications are available at the Food Closet, or call (916) 685-8453 for more information.
Posted by Elk Grove Food Bank Services at 10:35 AM No comments: 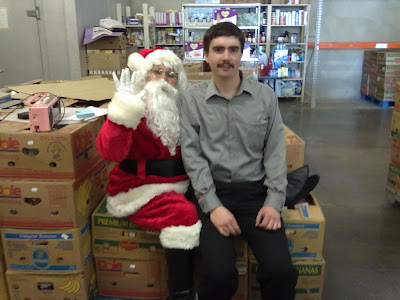 The Clothes Closet Warehouse Has Electricity!

The City of Elk Grove partnered with Sacramento Municipal Utility District (SMUD) to provide electricity to the Elk Grove Food Bank Services Clothes Closet Warehouse. The facility, where EGFBS volunteers work to organize and store clothing donations, previously did not have electricity. Work hours in the warehouse were previously scheduled to coincide with daylight hours and seasonal climate conditions. Dedicated volunteers worked early in the day during the summer to take advantage of the cool mornings, and bundled up to work during the winter.

The City has also constructed a sidewalk along Williamson Drive to provide safe access to Elk Grove Adult Community Training Center (EGACT) and Elk Grove Food Bank Services Clothing Warehouse. Our volunteers and EGACT clients who walk to the area now have a safe path out of the way of traffic.

There will be a Ribbon Cutting Ceremony on Tuesday, January 18,2011, at 10 a.m. for the improvements made in the area.
Posted by Elk Grove Food Bank Services at 11:51 AM 1 comment:

Tamara joined Support Works about six months ago. When she arrived, she was very quiet and subdued. It was in our Support Group that she finally told us her story, and it took my breath away. Tamara survived a five-year relationship that was severely abusive, the death of three of her children and the need for rehabilitation in order to walk again.

Tamara is working forward toward becoming self-sufficient: she has enrolled in college, majoring in photography and photojournalism; she is working with volunteers from Support Works to rebuild herself financially; and she is working with our Employment Specialist to establish her resume and portfolio as a local photographer/photojournalist. With this busy schedule, she also volunteered more than 300 hours for the Policy Council, Parent Advisory Committee, and other committees in Head Start.

Recently, Tamara came to Group for help with a decision she needed to make. She had been nominated for National Head Start's Beating the Odds Award, and invited to the National Head Start Parent Conference in Virginia Beach. Although she initially did not want to attend, after encouragement from her peers at Support Works, she did. And she won!

It is an on-going pleasure for anyone who knows of Tamara’s story, to watch her steadily and methodically work through the problems and issues that were holding her back. She is a shining example of what perseverance and hard work will accomplish.

Tamara’s encouragement to those who need to work through issues in their lives: “I want others to know that as long as they are willing to do the work they don't have to stay at the bottom. Moreover, they do not have to accept being in an unhealthy relationship. I did not think I deserved any better but I did.”
Posted by Elk Grove Food Bank Services at 8:27 PM No comments: 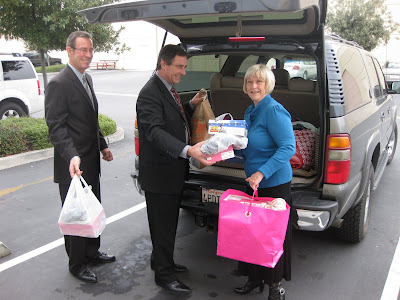 Support Works Program Manager, Mary Ann Chappelle, and I were transporting donated clothes from the administrative offices to the clothes closet. Our arms were full of clothes and shoes. One of the pairs of shoes were these athletic shoes that were worn, but still in good shape.

We walked past a young client and she inquired about the shoes. "What size are those?" She kicked off her flip-flops and tried them on. They fit! Just to make sure, we found a pair of socks for her to wear, checked the toe space, and had her walk around to make sure of the fit.

We are thankful to be able to match donated shoes to feet that should be protected from the elements.
Posted by Elk Grove Food Bank Services at 8:42 PM No comments:

Elk Grove Food Bank Services
As a dedicated non-profit, our mission is to develop, mobilize, and provide community resources to our neighbors, promote independence and preserve dignity in the fight against the many faces of hunger and human need. We have grown from a resource for the hungry to a larger social services organization; offering a variety of additional services to help meet the needs of our community. Our goal is to provide food security, so our community isn’t a hungry community.